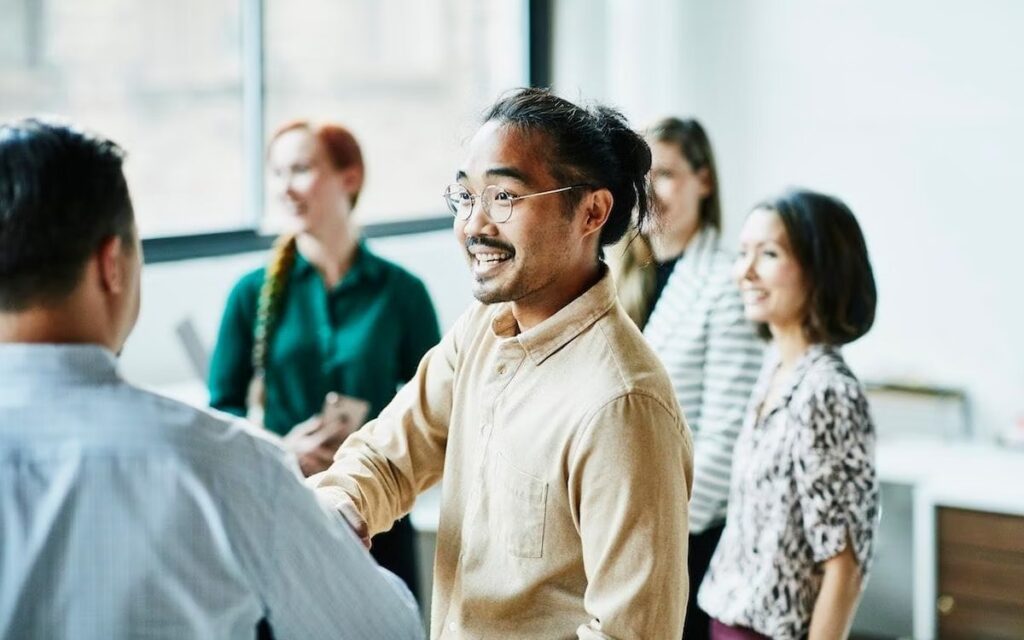 Salaries are high in technology, and the demand for talent—especially in disciplines like software and machine learning—is booming. Breaking into the field looks relatively simple. Maybe you’ve heard that a computer science master’s degree like Tufts University School of Engineering’s Online MS in Computer Science (MSCS) opens doors. That’s true. There are many lucrative master’s in computer science jobs for those with the right qualifications and credentials.

But before you launch a career in computer science, know that the employment landscape isn’t as straightforward as it seems. Employers approach computer science jobs differently. Advancing takes more than just tech skills, and considering how fast computer science is changing, it’s not always clear how today’s in-demand skills will hold up in tomorrow’s marketplace.

Computer scientists don’t create job titles. If they did, there would likely be more consistency in how employers categorize positions.

Here are five surprising facts about working in computer science—plus strategies to ensure you can advance quickly into the roles you want most.

Computer scientists don’t create job titles. If they did, there would likely be more consistency in how employers categorize positions. Instead, employers and hiring managers (who may or may not be tech-savvy) create job titles, which is why the skills and responsibilities associated with specific titles vary considerably from company to company. When the labor market data company EMSI looked at skills versus titles, for example, it found that the difference between what Amazon and GM look for in software engineers is significant:

Muddying the waters further is the fact that job titles associated with the same skills and responsibilities also vary from company to company in tech. You might be an information security engineer, security architect, cybersecurity engineer, or (at one high-profile finance company) a Cyber Threat Hunter doing the same work. The reality is that public-facing titles can only tell you so much because job titles seldom reflect the full scope of a role.

Similarly, titles won’t tell you much about the seniority level of a role. Is a senior lead software engineer more or less senior than a senior software engineering manager? Does the senior manager of data science answer to the director of data science? At a glance, it’s hard to say—because there are no industry standards for titling conventions. The VP of Technology at one company might be the Chief Technology Officer at another.

Salaries could provide a window into how skilled employers expect applicants to be or how senior roles are, but they usually don’t. Compensation for similar titles can vary a lot from company to company. Consider the following information from Glassdoor:

A front-end developer at Facebook earns twice as much as a front-end developer at Google. A software engineer III earns almost $50,000 more at Google than at Facebook. And computer scientists in certain positions at Netflix out-earn them all. To understand why this is, you have to look at job listings, not just titles. The responsibilities associated with a position and the skills employees bring to the table tell you more than job titles alone.

That’s why there’s so much overlap in the most common MSCS input careers (jobs incoming students hold) and output careers (jobs they have after earning a computer science master’s degree). Most students who pursue an MS in Computer Science at Tufts are software developers and computer programmers, information security analysts, database administrators, computational researchers, and computer and information systems managers before and after graduation. However, their post-graduation responsibilities (and salaries) are often very different from those before enrolling in Tufts School of Engineering online programs, even if titles don’t change.

Automation driven by disruptive technologies like AI, deep learning, and robotics is poised to eliminate positions across sectors, but many people assume computer science jobs are safe. They’re not. Software developers, network engineers, IT engineers, data scientists, and other professionals in tech are watching automation take over work once done exclusively by human beings. AI won’t automate computer science jobs out of existence. Software engineers are undoubtedly safer from automation than cashiers, but basic technical skills are some of the easiest skills for artificial intelligence systems to replicate. Today’s most in-demand tech skills will most likely become the basis of the jobs robots do tomorrow.

Many of the technical skills associated with master’s in computer science jobs in 2021 will be out-of-date in 10 years.

Think of earning a Master of Science in Computer Science as the start of a lifelong journey, not the culmination of your career development. Commit to becoming a lifelong learner, so you can adapt when your existing skills become obsolete. Choose an on-campus or online computer science master’s program that teaches students how to tackle real-world computing problems and how to update their competencies as the need arises. Tufts immerses MSCS candidates in an interdisciplinary culture of learning that incorporates the arts, humanities, and science into the engineering curriculum. They work on projects much like those they’ll encounter in their professional lives. And they learn valuable soft skills that are becoming increasingly important in tech.

In a 2016 Future of Jobs Report, the World Economic Forum predicted that “[m]any formerly purely technical occupations are expected to show a new demand for creative and interpersonal skills.” In other words, the kinds of skills present-day AI systems and robots don’t possess. One year later, the McKinsey Global Institute reaffirmed that stance when it wrote that automation would inspire people to “make use of the innate human skills that machines have the hardest time replicating: social and emotional capabilities, providing expertise, coaching and developing others, and creativity.”

Executives in IT and other tech fields report having trouble recruiting job candidates with soft skills related to problem-solving, communication, interpersonal relations, and attitude. As new technologies automate hard skills in computer science, the demand for these and other so-called human skills will likely go up. To train ethical AI systems, professionals will need keen emotional intelligence. To design systems capable of replicating themselves, they’ll need well-developed critical thinking and communication skills. To conceive of the incredibly complex computer systems of tomorrow, they’ll need to be prodigious collaborators.

Look for a hands-on, career-focused computer science program like the Tufts online MSCS in which course work is driven by industry demand and highly collaborative. You’ll enter the job market with the scalable technical skills necessary to do your job as well as experience working on teams and human skills like patience, planning, and perseverance—putting you one step ahead of those in your field who focused entirely on technical training.

4. Your education doesn’t speak for itself

A master’s-level computer science degree isn’t all it takes to succeed in tech. Work experience matters as much as education, if not more, because employers don’t know the content of every MSCS program. There are Master of Science in Computer Science programs that teach technical fundamentals and little else. On the other end of the spectrum, there are research-driven master’s programs that look more like doctoral programs than the typical graduate program.

The best on-campus and online computer science master’s degree programs, however, are those that give students practical, contextually appropriate experiences they can put on a resume to showcase how their technical competencies and soft skills are applicable in real-world settings. That eliminates what Stephen Kosslyn calls “the single biggest challenge” in learning, which he describes in the book Building the Intentional University as “a problem transfer” in which “you learn something in one context, typically in a classroom, and then you fail to use it when it’s appropriate in different contexts.”

Start gaining practical experience while you’re still in school. What sets Tufts’ part-time, online graduate-level program in computer science apart is its approach that treats classwork like professional work. The two-semester, hands-on culminating capstone project tests students’ technical competencies through independent project work, giving them a preview of what it’s like to apply those competencies when working on unstructured, open-ended problems—and something they can put on their resumes to show prospective employers that they can deliver value in real-world settings.

5. Nobody knows what the computer science job market will look like in 10 years

Futurists estimate that up to 85 percent of the jobs that will exist in 2030 haven’t been invented yet. Whether that will prove true remains to be seen, but it’s clear that the pace of technology change is accelerating, and that will have significant ramifications for computer scientists.

Aspiring software engineers, machine learning engineers, product managers, data scientists, and QA engineers don’t necessarily think about the fact that many of the technical skills associated with master’s in computer science jobs in 2021 will be out-of-date in 10 years. Achieving success in tech means fostering agility in oneself and accepting the reality of the learn-earn-learn cycle.

Do what you can to prepare for the future, even when it’s not clear what that future will hold. Tufts School of Engineering’s Online Master of Science in Computer Science program teaches students to craft realistic programs in various programming languages, predict the complexity of algorithms, develop large-scale software systems, and adapt as the real-world demand for specific computer science skills and expertise shifts.

Today’s computer science job market is complex, and there’s no way to know for sure what tomorrow’s master’s in computer science jobs will be. What’s certain is that careers in computer science will always involve lifelong learning and regular skill refreshment. Adaptability is just as important in computer science as having refined technical abilities, and Tufts MSCS graduates emerge equipped to continue growing and learning long after graduation. Faculty who are leaders in their fields strive to convey the excitement of discovery and reward students enrolled in the program for creativity, invention, and entrepreneurship. They also teach the kinds of soft skills related to communication, collaboration, and critical thinking that most people don’t realize are highly prized in tech. Tufts School of Engineering trains online students to overcome any skills gaps—technological or human—they encounter within themselves.

The network computer science master’s students build in the program may be equally important in a rapidly changing industry. Skills become obsolete, but the value of who you know never changes. The Tufts online student experience promotes connection among students in the MSCS program. The university’s alumni network ensures students have ample access to mentorship and professional opportunities after graduation. Right now, there are Tufts Master of Science in Computer Science alumni working at Amazon Robotics, Facebook, Google, IBM, Microsoft, and many other high-profile companies in and out of tech.

Ultimately, students who invest in Tufts’ part-time 33-credit hour online Master of Science in Computer Science program are ready for anything and everything. They have the hard and soft skills and knowledge to qualify for internships and jobs at top companies known for hiring tech talent, the professional and personal connections they’ll need to get a foot in the door, and a deep understanding of what it takes to keep up in an evolving field. Learn more about Tufts University’s admission requirements or apply now to join their ranks.